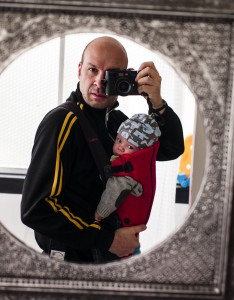 Charles is best known for his documentation of the music phenomenon known as “grunge”, culminating in the critically acclaimed monograph Touch Me I’m Sick (powerHouse, 2003). Peterson’s photographs have graced hundreds of record covers, and appeared in publications worldwide including the The New York Times, Mojo, People, Rolling Stone, Spin, Entertainment Weekly, and Newsweek, and have been exhibited in major museums in the U.S. and Europe. He has two previous monographs on the grunge scene, Screaming Life (Harper Collins, 1995) and Pearl Jam: Place/Date (with Lance Mercer, Rizzoli/Vitalogy, 1997). His book of the contemporary breakdancing scene, Cypher, was published in the fall of 2008 by powerHouse, and his photographs are currently featured in the Nirvana exhibit at the EMP. Clients have included Adobe, MSN Bing, Dr. Martens, and UNICEF. He currently lives in Seattle’s Central District with his wife Mascha, their six year old old son Felix, and three year old daughter, Leica.