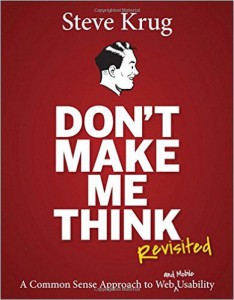 Steve Krug (pronounced “kroog”) is best known as the author of Don’t Make Me Think: A Common Sense Approach to Web Usability. First published in 2000 and now in its third edition with over 450,000 copies in print, this book has served as almost everyone’s introduction to usability and user experience design.

In 2010, he followed it with the usability testing handbook Rocket Surgery Made Easy: The Do-It-Yourself Guide to Finding and Fixing Usability Problems.

The books were based on the 25+ years he’s spent as a usability consultant for a wide variety of clients like Apple, Bloomberg, IBM, Lexus, NPR, the International Monetary Fund, and many others.

His consulting firm, Advanced Common Sense (“just me and a few well-placed mirrors”) is based just outside Boston, Massachusetts.

Steve currently spends most of his time teaching usability workshops, consulting, and watching old black and white movies from the thirties and forties.